it’s been long overdue. Our last high altitude balloon attempt was over 2 year ago. Since then i’ve been busy with other things, but been building my payload on the slow burner.

so last week I’ve decided to take advantage of the jewish holidays and the fact my daughter is on school vacation to give it another try. 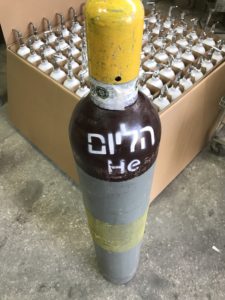 the basic gps-camera-transmitter was ready since last year. i’ve added a second usb webcam so I can take picture both downwards and sideways and moded the scripts to alternate. I’ve put together an enclosure out of an ice cream box and glued everything together. 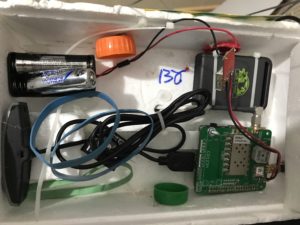 Since the payload goes through some hard vibrations, I’ve used my experience with rugged systems and secured everything as much as I could. I’m using zip-ties to hold the batteries in place. Out of a piece of wood I’ve build a rig that will hold the SD card as I’ve noticed it tends to pop out in even the slightest bump. The cameras as hot glued to the casing. 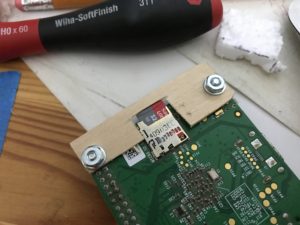 The launch train starts with 3 pieces of thin paracord tied to a soda bottle caps that acts as anchors on the styrofoam box. They join together and connected to the parachute using a fishing line swivel, so the cameras will be relatively stable even if the balloon/parachute rotate. The parachute lines goes through a metal washer that connects to the balloon wire. On ascent the ropes are kept together and the parachute is closed causing no drag, on descent the weight of the washer, line and balloon leftover pull the washer down and the parachute (should) deploy. 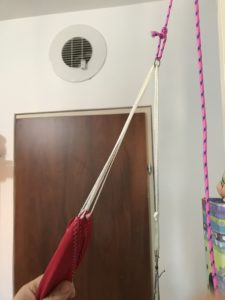 The whole thing weighs just about 350g. I’m using a Hwoyee 500 balloon and a 18” parachute. So it’s easy to plan for 6 m/sec vertical speed both up and down with helium to spare. I’m planning on launching from the the most western point in israel, near the egyptian border. Hopefully it should land in the dead sea. The shoreline is very narrow so my guess is it will land either in the desert mountain or fall into the sea. But with some luck i might be able to recover it (note I am launching on friday the 13th). 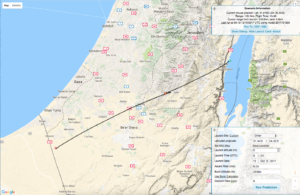 So fingers crossed I’m packing everything and making last minute preparations. You can track the flight on aprs.fi and if in the vicinity try to receive the SSTV transmissions on 144.500MHz. I’ll try to upload some images over here too.